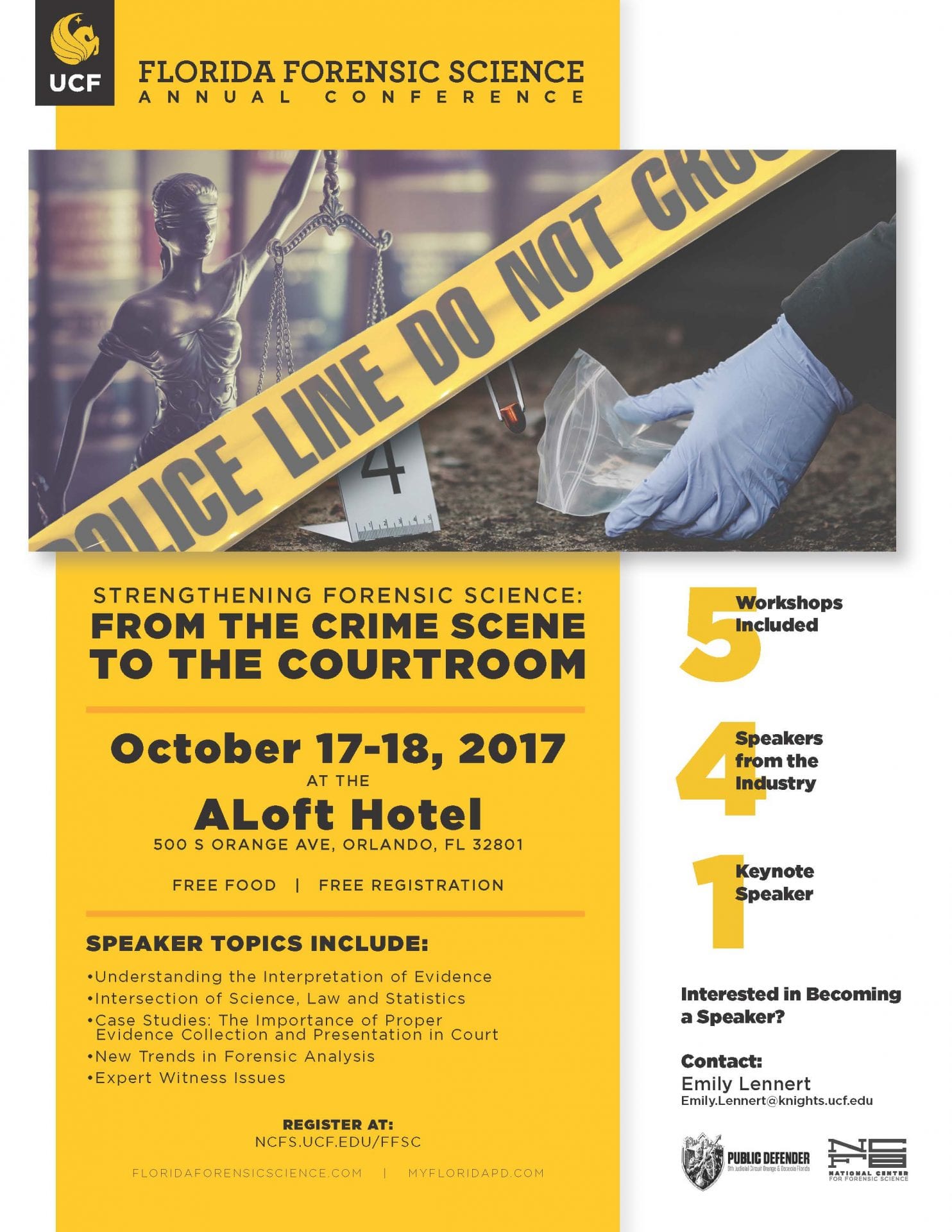 This Conference will examine evidence interpretation, the intersection of science, law, and statistics, advances in forensic analysis, and expert witness issues.  This presents the opportunity to discuss 1) how evidence may be interpreted or misinterpreted and the challenges that may be encountered in evidence interpretation.  2) the application of statistics, evidentiary value, and the challenges that may be encountered in the application of statistics to science and law. 3) novel techniques and research advances in forensic science. 4) challenges that may be encountered in using or in being an expert witness. The goal of this Conference is to educate the forensic and legal communities on the current state of forensic science and the advancements that are being made to strengthen forensic science. The expected audience will include local attorneys who practice criminal litigation, forensic professionals, and students and academic professionals in both legal and scientific fields.  Please feel free to share this invitation with your colleagues and/or students.

This conference will take place on Tuesday and Wednesday, October 17-18, 2017, from 8:00 am until 5:00 pm at the Aloft Downtown Orlando Hotel.  Each session lasts about 2.5 hours, excluding breaks and introduction.

Dr. Michael Sigman is the Director of the National Center for Forensic Science at the University of Central Florida.  He studied chemistry at studied chemistry at Southwest Missouri State University, receiving a B.S. degree in 1982. His doctoral research in physical organic chemistry was undertaken at Florida State University. In 1986 he moved to the University of Illinois, Urbana-Champaign, as an NIH postdoctoral fellow, and then moved to the University of Chicago in 1987 for two additional years of NIH postdoctoral work in photochemistry and laser spectroscopy. In 1989, he was hired as a research scientist at Dow Chemical Co. in Midland, MI. One year later, Dr. Sigman accepted a research staff position at Oak Ridge National Laboratory in Tennessee, where he spent 12 years conducting research in areas ranging from environmental photochemistry to explosives analysis. In 2002, Dr. Sigman moved to the University of Central Florida (UCF) and the National Center for Forensic Science (NCFS) to become an Associate Professor of Chemistry and the Assistant Director for Physical Evidence. In 2013 he was promoted to Professor at UCF and Director of the NCFS. Dr. Sigman has authored over 70 journal publications and book chapters. His work has been cited over 1,300 times by his colleagues and peers. 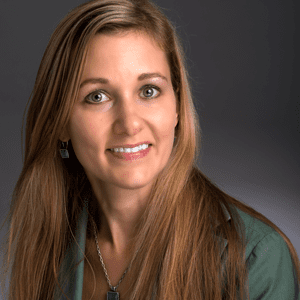 Dean Jessica Gabel-Cino is an Associate Dean for Academic Affairs and Associate Professor of Law at Georgia State University Law School.  She teaches courses on forensic evidence, forensic medicine, bankruptcy and contracts. Her primary research focuses on fraud and ethics at the intersection of law and science.  Cino received her J.D., magna cum laude, from the University of Miami School of Law and her B.S., summa cum laude, from the University of Central Florida.  While in law school, she co-founded and served as the executive director for the Wrongful Convictions Project, which assisted defendants with claims of actual innocence.  The project continues and is a fully-funded Innocence Clinic. Prior to joining Georgia State Law, she clerked for Judge Peter T. Fay of the U.S. Court of Appeals for the 11th Circuit. She then practiced law with Convington & Burling LLP in San Francisco, focusing on white collar crime, bankruptcy, and pro bono death penalty work.  While at Covington, Cino taught classes at the University of California Hastings School of the Law.  Cino presents on forensic evidence, criminal law, business law, bankruptcy and trial stragegy.  She also has written on a wide-range of topics, including the validity of forensic evidence genetic testing, forensic DNA identification, trial and jury tactics, bankruptcy fraud, lender liability, legal ethics and bioethcis. 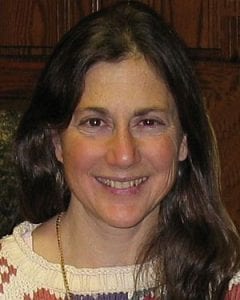 Dr. Karen Kafadar is a Commonwealth Professor & Chair of Statistics at University of Virginia. She received her BS/MS in Math/Stat from Stanford, her Ph.D. in Statistics from Princeton, and previously held positions at NBS (now NIST), Hewlett Packard’s RF/Microwave R&D Division, National Cancer Institute, University of Colorado-Denver, and Indiana University. Her research focuses on robust methods, exploratory data analysis, characterization of uncertainty in the physical, chemical, biological, and engineering sciences, and methodology for the analysis of screening trials.  She served on the National Academy of Sciences’ Committees that led to “Weighing Bullet Lead Evidence” (2004), “Strengthening the Forensic Science System in the United States: A Path Forward” (2009), “Review of the Scientific Approaches Used During the FBI’s Investigation of the Anthrax Letters” (2011), “Evaluating Testing, Costs, and Benefits of Advanced Spectroscopic Portals” (2011), and “Identifying the Culprit: Assessing Eyewitness Reliability” (2014).  She also served on the governing boards for ASA, IMS, ISI, and NISS, is a member of OSAC’s FSSB, and chairs OSAC’s Statistical Task Group and ASA’s Advisory Committee on Statistics in Forensic Science.  She is past Editor of JASA Reviews (1996-98) and Technometrics (1999-2001), is currently Health & Life Sciences Editor for The Annals of Applied Statistics, is an Elected Fellow of the ASA, AAAS, and ISI, and was recently elected ASA President (2019). 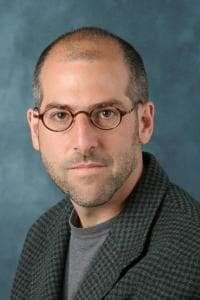 Dr. Simon Cole is a Professor of Criminology, Law and Society and Director of the Newkirk Center for Science & Society at the University of California, Irvine.  He received his Ph.D. in Science & Technology Studies from Cornell University.  Dr. Cole is the author of Suspect Identities: A History of Fingerprinting and Criminal Identification (Harvard University Press, 2001), which was awarded the 2003 Rachel Carson Prize by the Society for Social Studies of Science, Truth Machine: The Contentious History of DNA Fingerprinting (University of Chicago Press, 2008 with Michael Lynch, Ruth McNally & Kathleen Jordan), and more than 20 scholarly articles and book chapters about the scientific validity of fingerprint evidence and its use in the courts.  He is a member of the American Academy of Forensic Science Standards Board Friction Ridge Consensus Body and a Co-Investigator in the National Institute of Standards and Technology (NIST) Center for Excellence, the Center for Statistics and Applications in Forensic Evidence (CSAFE).  He is Co-Editor of the journal Theoretical Criminology, and he is Associate Editor of the National Registry of Exonerations. 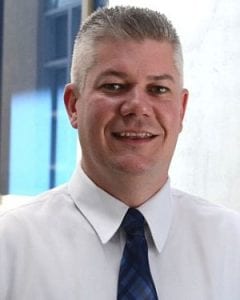 Dr. Adam B. Hall is the Director of the Mass Spectrometry Facility – Barnett Institute of Chemical and Biological Analysis – Department of Chemistry and Chemical Biology at Northeastern University in Boston, MA and also serves as the Associate Director of the Center for Advanced Research in Forensic Science (CARFS), a NSF and NIJ jointly supported I/UCRC. He is the lead editor for the 3rd Edition of the Forensic Science Handbooks, co-edited with the late Dr. Richard Saferstein. Dr. Hall serves as a member and chair of the Research and Training Task Group within the Fire Debris and Explosives Subcommittee of the Organization of Scientific Area Committees (OSAC). He also serves on the Board of Directors for the Northeastern Association of Forensic Scientists (NEAFS). Hall was a former faculty member within the Biomedical Forensic Sciences Program at Boston University School of Medicine where he instructed in various areas of forensic chemistry and instrumental analysis. He received a Bachelor’s in Chemistry from Stonehill College, a Master’s in Chemistry and a PhD in Analytical Chemistry, from Northeastern University. Prior to his academic career, he was employed by the Massachusetts State Police Crime Laboratory as a forensic chemist within the Crime Scene Response, Criminalistics and Arson/Explosives Units